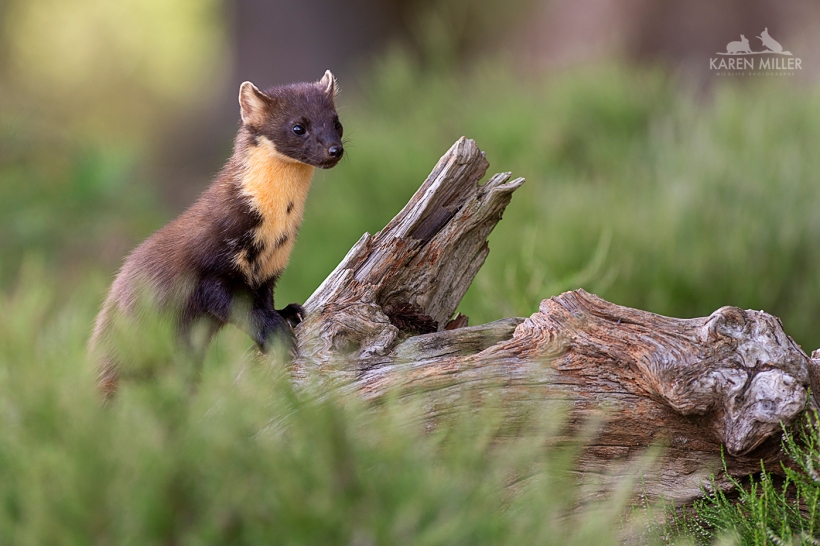 It was great to return to the Scottish Highlands and my home away from home in Tomatin in late July. My first time back in the area since the 7 weeks I spent in there in February/March. I’ve had a stressful and frustrating few months since my return to Glasgow so the break was very much needed although I have come home to more of the same… I love the Highlands, when I’m driving up the A9 and I pass the sign saying I’ve entered the Cairngorms it’s always as though a weight has been lifted from my shoulders and I really feel as though I’ve come home. I feel complete when there – the mountains, the moors, the rivers and shoreline as well as the amazing wildlife, what’s not to love?

First animal I saw, in the back garden of my host’s house was a brown hare! I’d been told it had been a frequent visitor of late, but unfortunately this was the only time I saw it.

I did of course spend time with my favourite animal, the other hare – the mountain hare. Photographing them presents quite a challenge over the summer – their brown pelage is virtually invisible on the hillside and if you do see one the likelihood is that it’ll run before you get anywhere near it. However, I love being up there with them regardless of the time of year and headed up on the Saturday evening. I thought at this time of day they might be more active, but although I climbed to the top of the hill (it’s much easier when not wearing winter gear), I hardly saw any hares and the only leveret I found was sadly dead. I found one hare on the lower slopes as I was leaving. The flies were terrible by now though, so I didn’t stick around!

I did see quite a bit of other wildlife though both on the hillside or on the road back home – red deer stag, brown hares, suicidal rabbits, meadow pipits, oystercatchers, grey wagtail, juvenile mistle thrush and a common sandpiper!

I returned early the following morning not feeling entirely optimistic. Instead of walking up the path I cut across one of the hills and spent a little time with the hare I’d photographed the day before.

It moved on and so I headed up the hill and when scanning the heather with my bins saw a hare sitting hunkered down above me. I fully expected it to disappear, so I edged closer very slowly, stopping for periods of time as I approached. Eventually I was within a decent distance to photograph it with my D500/Tamron 150-600mm lens (focal length of 900mm). It soon became apparent that I’d struck hare gold. This animal rarely stayed inactive for long – it groomed, snoozed, stretched and grazed.

After a while I moved a bit closer still and then it hopped over the hillock. Thinking it must have disappeared, I carefully sat up and realised it had settled down again just out of sight. I risked shuffling round slowly and in doing so was closer than before – close enough that the hare filled my viewfinder at 900mm. We sat together for another couple of hours at least and I captured some lovely, and at times funny, images. It really reminded me of Mrs G in many ways, a wonderful hare.

I do wonder if it was female known as “Ginger” who was the mate of my favourite March 2018 hare Rafa. I only ever knew Ginger in her winter pelage, but both shared a similar location and ginger-tinged fur. It would be lovely if it was the same hare.

Experiences like this are a real joy and privilege. I met someone later in the week who told me how he wished you could bait hares, but one of the things I enjoy most about photographing them is the very fact you can’t. It’s always a thrill to me when a hare lets me get close enough for images, especially as they know you’re there and are allowing you to approach. In winter this can be because they want to conserve heat by staying put, but in the summer that’s not the case. A joy.

I looked for this hare again on Wednesday but she was nowhere to be found sadly. I managed a few images of more distant animals up on the top of the hill far more in keeping with how I’d expect to get on at this time of year. I’ll be back with them in late August, and hopefully the heather will be out on the upper slopes.

The reason I chose late July was so that I could visit James Roddie‘s pine marten hide on the Black Isle. I’ve been lucky enough to photograph martens a few times at Aigas

and again at Bob Smith’s Nature Nuts hide in Perthshire (where I had the first sighting of one of the kits last year),

but having seen images from James’ hide it was certainly the most picturesque by a long way. By this time in 2018 the heather was in bloom but sadly the weather this year was completely different so this wasn’t the case, but it’s still a lovely setting. During my time in the hide I had three visits from martens. The first was mid afternoon in bright sunlight when the 2 year old female popped in for a snack.

Her mum appeared at 5 the following day and raced around the area for a few minutes barely pausing. At one point she ran directly towards the hide, I stopped trying to photograph her and we just stared at one another! James had mentioned that sometimes she actually popped up and looked into the hide, but she didn’t do that this time!

Finally, late one evening, after 9.30 in fact the 2 year old paid another visit. Fortunately there was still enough light for photographs as it had been a bright day and I had a f2.8 lens.

I’m pleased with the images I captured. They are beautiful animals – I love the colour of their pelage and the fact they are so quiet they just suddenly appear seemingly out of nowhere. Gorgeous faces and movement too. I say it a lot but a privilege to photograph them!

Red squirrels also frequent this hide and although they only appeared for short periods of time at around midday and early evening it’s always a joy to see them.

The most unexpected visitor to the hide was this cat!

My last two full days were slightly hampered by the weather – not for a change wind and rain, but hot, muggy, sunny weather – too hot for me! I found myself paddling along the shoreline in Lossiemouth burning my feet in the process. No wildlife to be seen but there were fighter jets coming in very low over the beach. Quite a sight and sound!

Friday I headed North to Loch Fleet. I’d been here in 2016 with Laurie Campbell on the Aigas Photo Masterclass Week and enjoyed my day. I briefly stopped off on the South side of the loch and scanned the water for otters. None to be seen although there were a lot of distant waders and an osprey fished right in front of me, but too far away for photographs. There’s a hide on the other side so I went there next but nothing to see, so I headed along to the top of the loch and wandered around the sand dunes trying to photograph butterflies and moths. Limited success, but I enjoyed myself!

Back on the other side again I parked opposite a group of harbour seals snoozing on a sandbank with a grey heron inbetween us. I watched these for an hour or so as they shuffled about trying to stay on dry land as the tide came in.

I awoke to heavy rain on Saturday and decided to visit an osprey family en route to my brother’s farmhouse in Perthshire. Two youngsters perched on a branch doing a whole lot of preening and every so often having short flights around the loch. The parents were perched out of sight but would appear suddenly in the air for a bit. Stayed here for a couple of hours watching life go by and getting eaten by beasties!

Sunday morning I visited the loch local to the farm on the hunt for beavers. I’d seen signs of them a few weeks earlier. Initially I had little success but enjoyed the sight of an osprey attempting to fish but being chased away be a couple of herons unwilling to share their food supply. There were quite a few little grebes with young on the loch and suddenly hundreds of ducks appeared (apparently they are bred for shooting). I walked round a bit further noticing more signs of beaver activity and then heard one eating bark. It was in a very dark location and it clocked me just after I had eyes on it and disappeared with an almighty splash, but at least I saw it!

Back at the farm there were lots of swallows flying about (I’ll miss them when they’re gone) as well as both adult and juvenile pied wagtails. I saw a couple of stonechats in the field behind and two chiff chaff appeared at the back of the house. Fantastic location, I’m very envious!

So all in all a great week! Highlights certainly the pine martens and that wonderful mountain hare but all good (except the weather!).