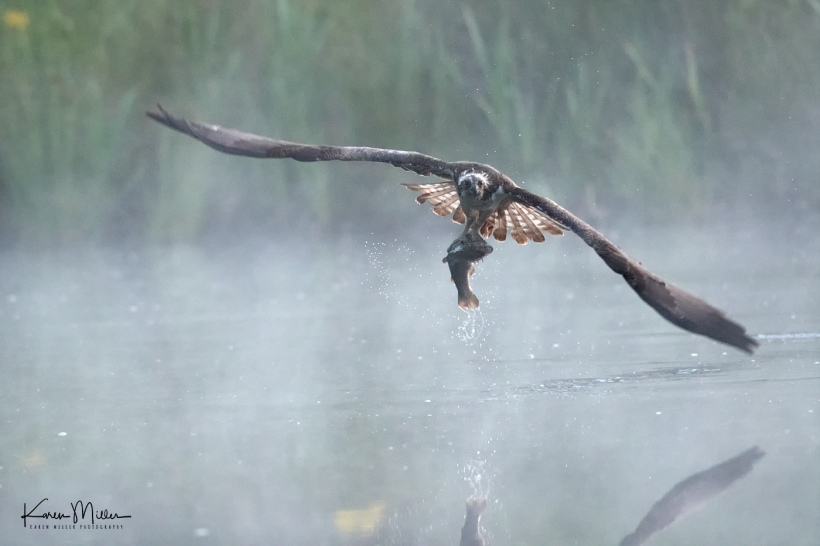 This is part three of my whistle-stop tour of Scotland blog.  I began in East Lothian, then spent three nights in Mull before heading up to Aviemore to try my hand at photographing the ospreys again.  I visited Gordon’s hides in mid-August 2017 at the very end of the season (blog here).  We had quite a few drops but the birds disappeared before the light improved.  Gordon told me that mid-July was a good time to come, better light and more birds, so after Andy Howard invited me to join his Lunga day during his photography workshop on Mull I decided I could combine the two.

So on Thursday morning I was up at silly o’clock (3.30am) to meet Gordon at 4.15.  The forecast was good, and although it was a chilly morning (5 degrees) I was optimistic. Unfortunately events conspired again us.  The chill in the air meant mist hanging over the pond – it felt more like an October morning.  Birds started coming down very early, way before there was any workable light.   The first images I have were taken at 4.47am – far too early really. I had to use an ISO of 11400 for a decent shutter speed and the widest aperture of f4. (I was using my Nikon D500 and Nikkor 300mm F4 lens, tripod mounted).

Here’s one of those images, nik efex dfine2 has come to the rescue slightly but it’s not great, you can see the mist.

The next bird dropped at 5am. I had reduced the ISO to 3200 and also lowered the shutter speed. 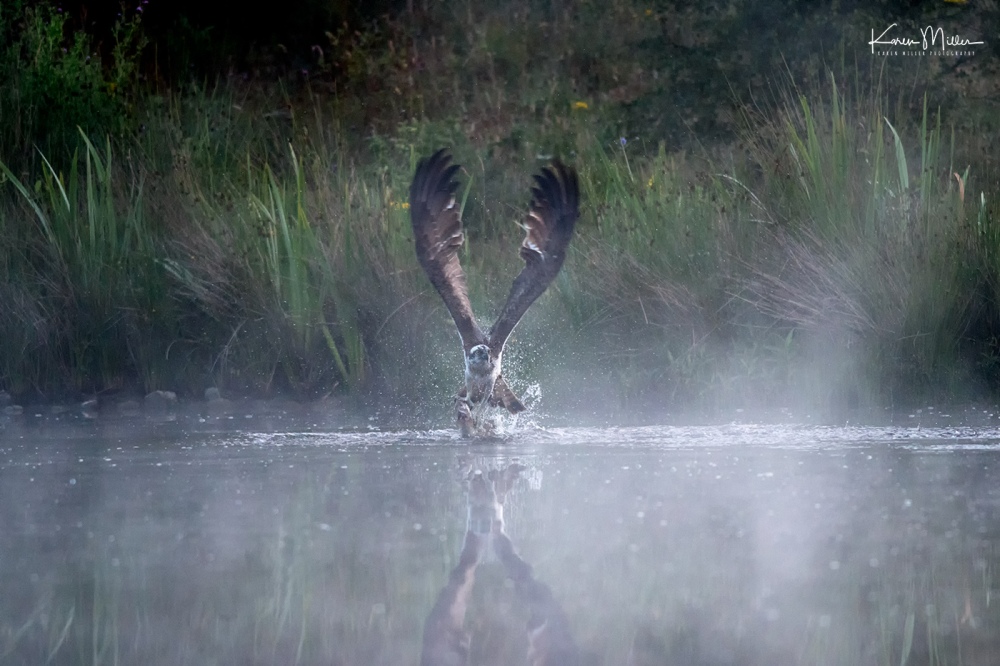 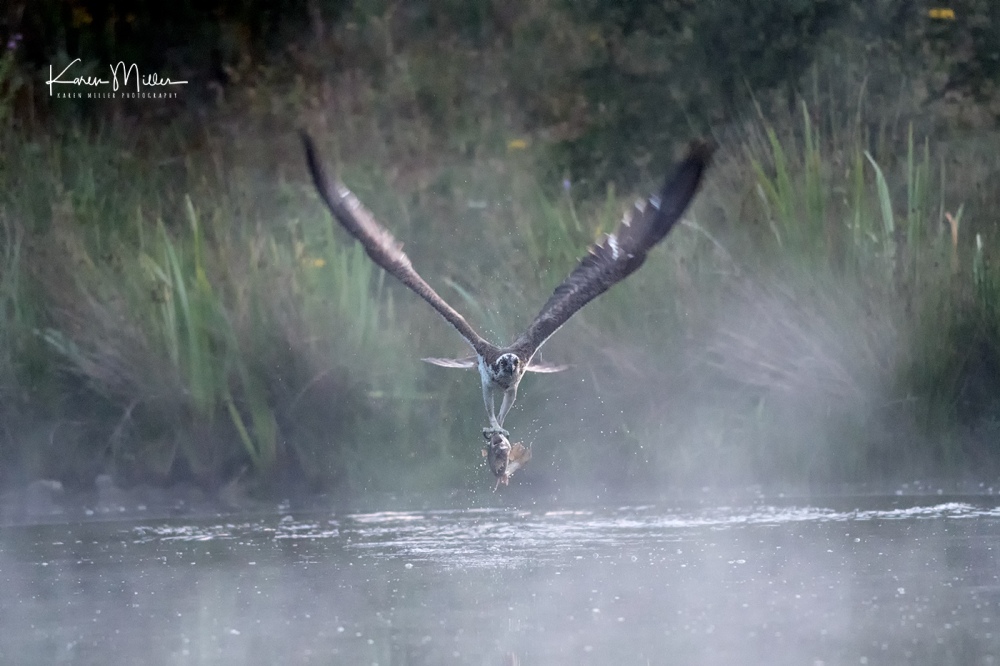 Atmospheric, yes, but quality is poor.  I tracked this bird as it flew off.  I like this first image, mostly for the expression on the fish’s face, except for the fence in the background! 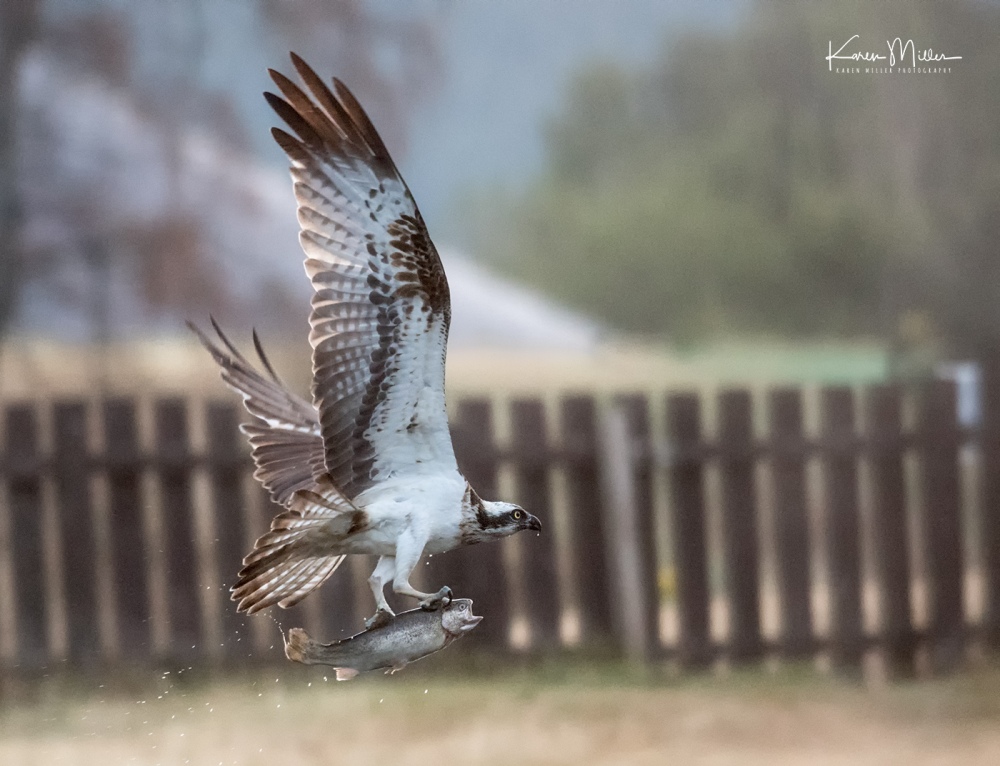 The next bird arrived moments later and I was feeling hopeful that this would be a good morning, so long as they didn’t all drop before the light improved! ISO between 3200 and 4500 with a shutter speed of 1/800th. 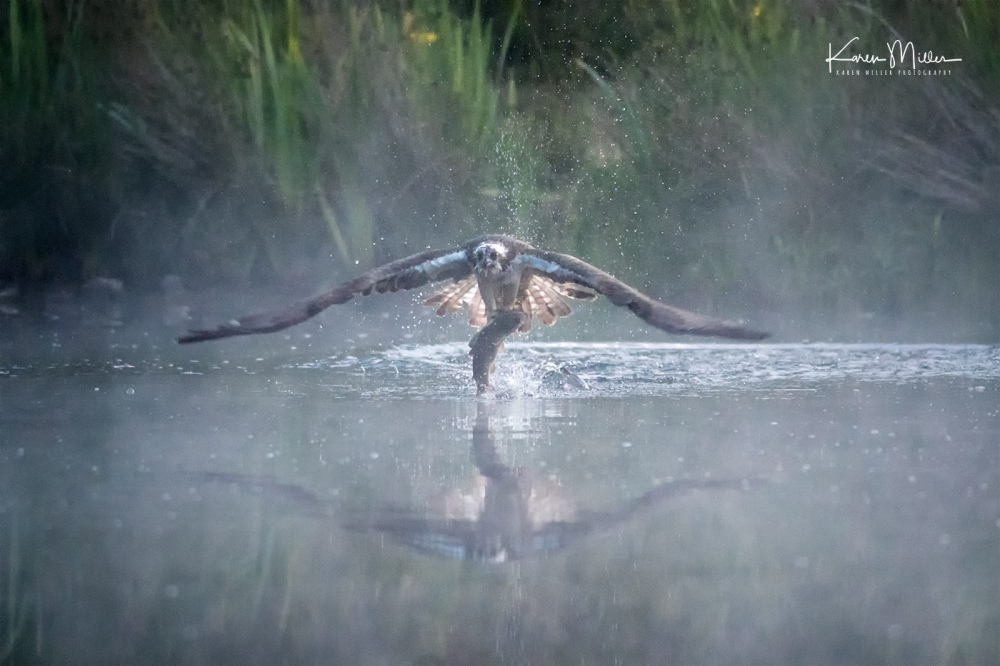 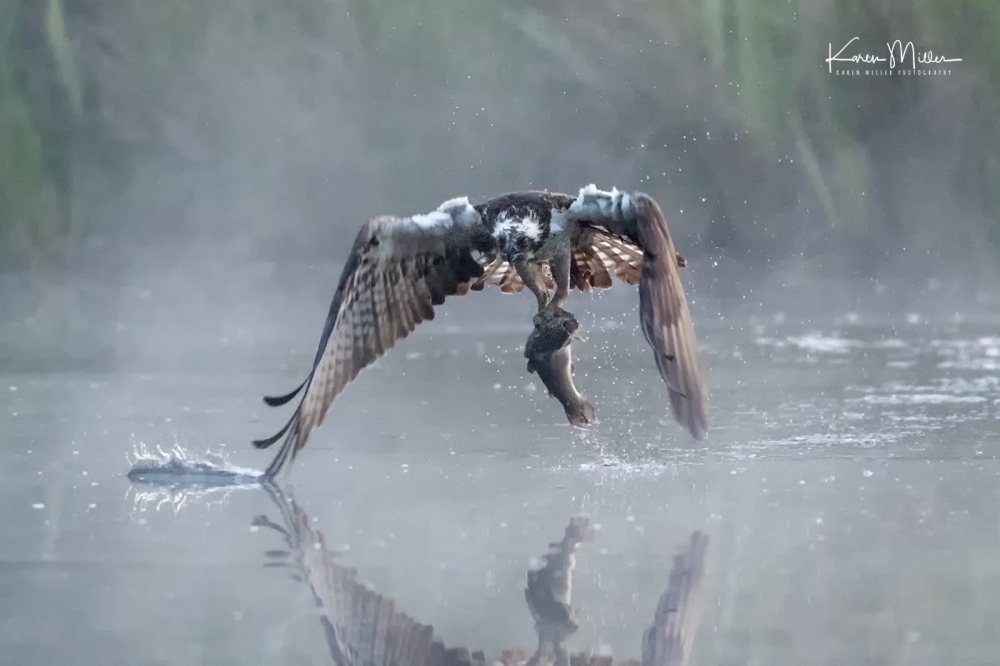 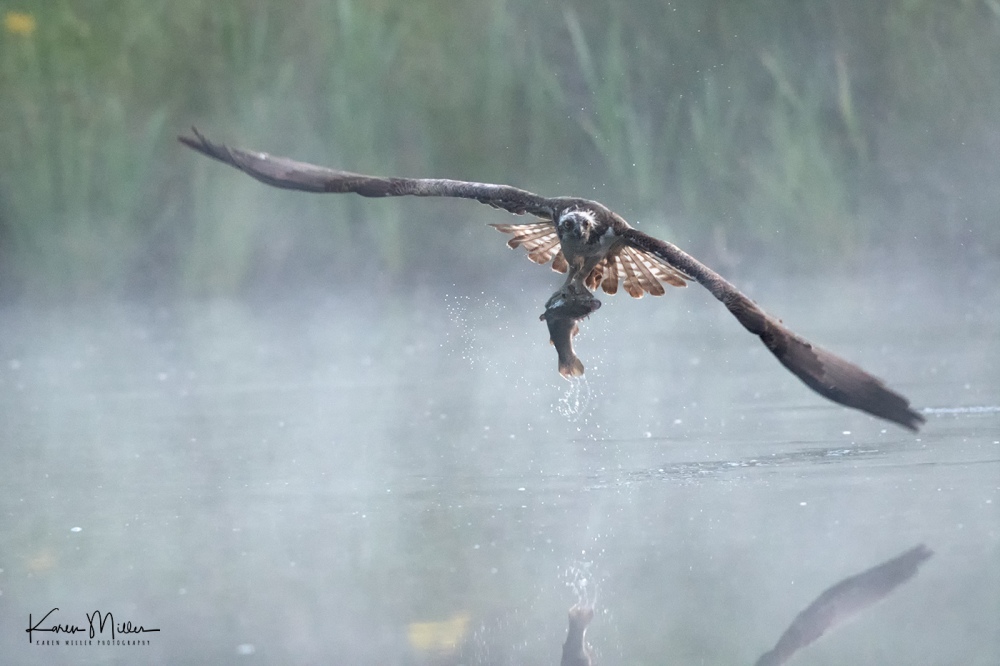 Then the action slowed down and I took what is probably my best image of the morning – of a mallard who was pottering about with her two fairly advanced ducklings.

The light was beginning to improve although the mist was slow to shift off the water.  The issue now became a dominant male who perched in a tree on the cliffside and chased off any approaching birds. Even more frustrating, he didn’t come down to feed himself.  So we’d hear Gordon tell us a bird was heading our way and then be told that the dominant male was preventing it fishing.   We had one more drop at 6.17 and that was it although others did try. 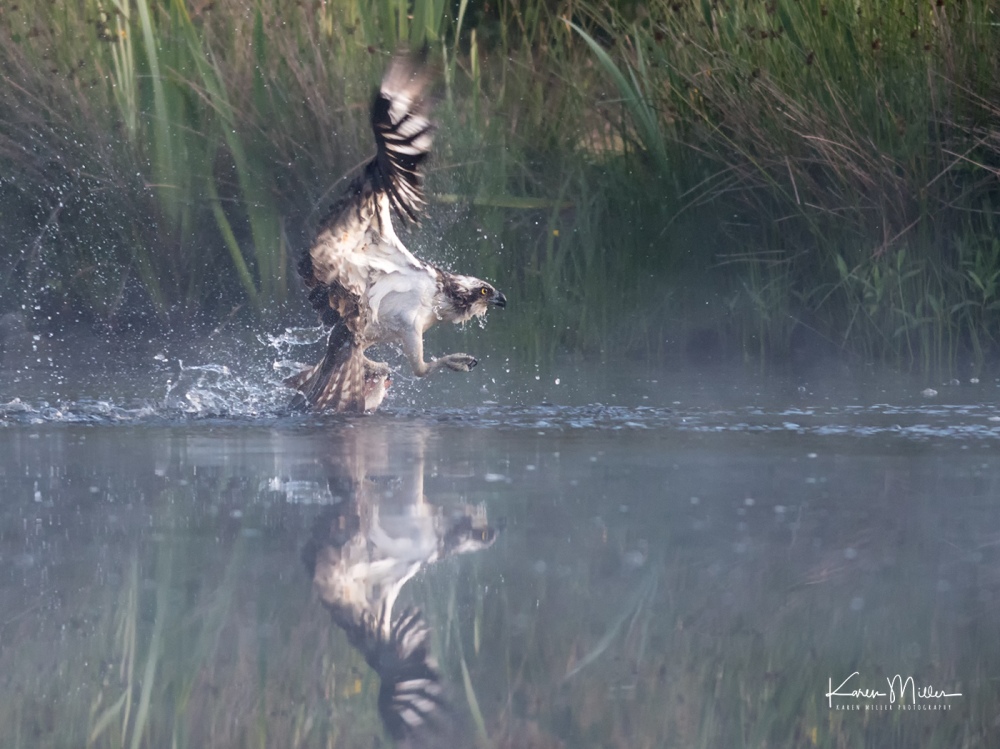 It was so annoying!!  The dominant bird was one of the reasons some of the others were coming so early (to avoid it) and then it prevented the late-comers feeding, probably pushing them to feed at Rothiemurchas instead.  The light by 6.30 was awesome but that was it.  My images, now I’ve worked on them are okay, but the potential was there for something special.

After a great breakfast at the wonderful Ardlogie Guest House and an hour’s snooze I went to visit the mountain hares.  It was a gorgeous day and as I trudged up the hill I realised it was the second anniversary of my very first mountain hare experience when I fell in love with these wonderful animals.

Sadly by the time I reached the hilltop the hares had gone to ground to escape the heat.  I spent seven hours walking about, sitting about and having the odd snooze, but the only hares I saw were those I disturbed which ran off.  Beautiful up there though. It was so dry that the heather crunched under foot, very different experience from my usual visits.  Talking of the heather it was blooming already carpeting the hillside in beautiful pinks and purples. So although the photography wasn’t successful it was lovely to be there.  This is about the only photograph I came away with, which I like, so not all bad!

What a difference a night makes! I awoke the following morning to heavy rain. I’d postponed my second visit to Gordon’s hide to the next day due to the forecast so enjoyed another excellent breakfast and decided to give the hares another go.  I figured that this wet weather would hopefully bring them out so I donned my waterproofs and trudged back up the hill (I hate that hill!).  The hares were, as hoped, much more visible but still tricky to approach.  Everyone talks about how you can get close to the animals here, but most are basing this on winter hares when they are hunkered down to preserve heat.  At other times of the year the majority don’t tolerate such a close proximity so it takes time to build trust and get within a reasonable distance.  Personally I never get too close but prefer to use my longest camera/lens combo (Nikon D500 and Tamron 150-600mm which gives a focal distance of 900mm) so that I can take frame-filling shots from afar. I hate the thought that I might be stressing the animals be it summer or winter.

The rain stopped as I eventually dragged myself up to the top but there were some pretty soggy looking hares. 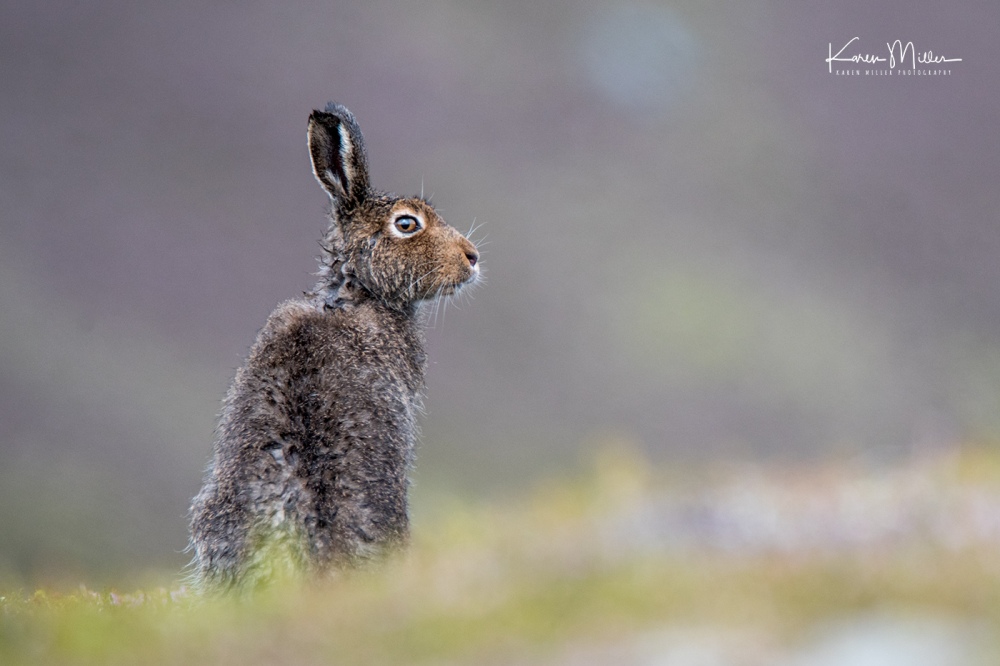 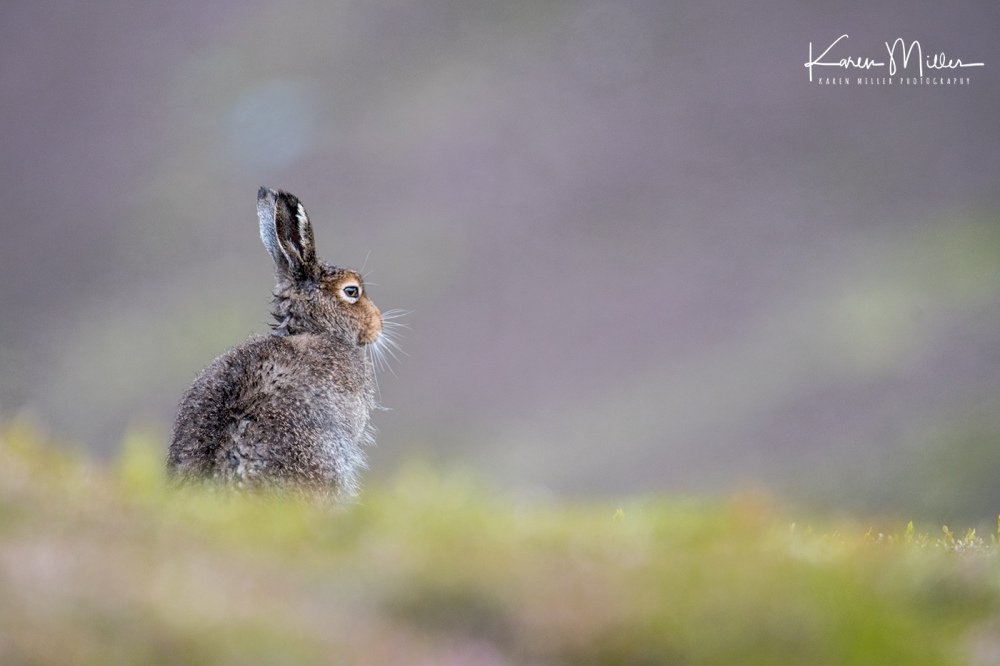 I think they were enjoying the rain though after such a prolonged dry spell.  Today the heather had stopped crunching but the ground was still pretty dry.

I didn’t manage any really interesting photographs as most hares kept their distance, but it was so lovely to spend time with them again, there’s nothing I enjoy photographing more.

Plus it’s a beautiful setting!

The final hare I photographed was the most accepting of my presence and it was a beautiful creature, almost golden in colour. 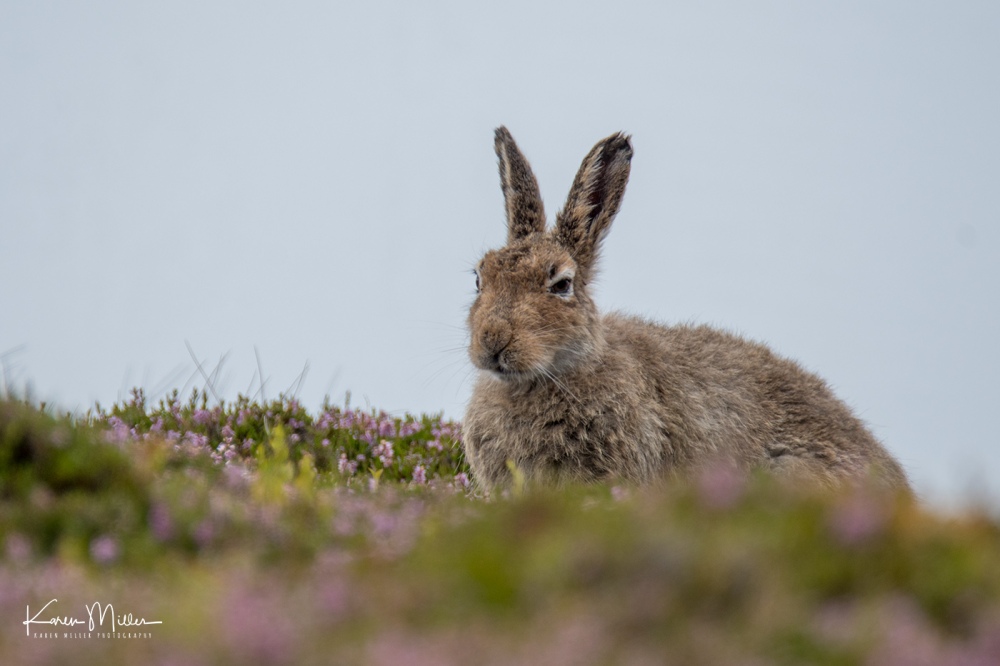 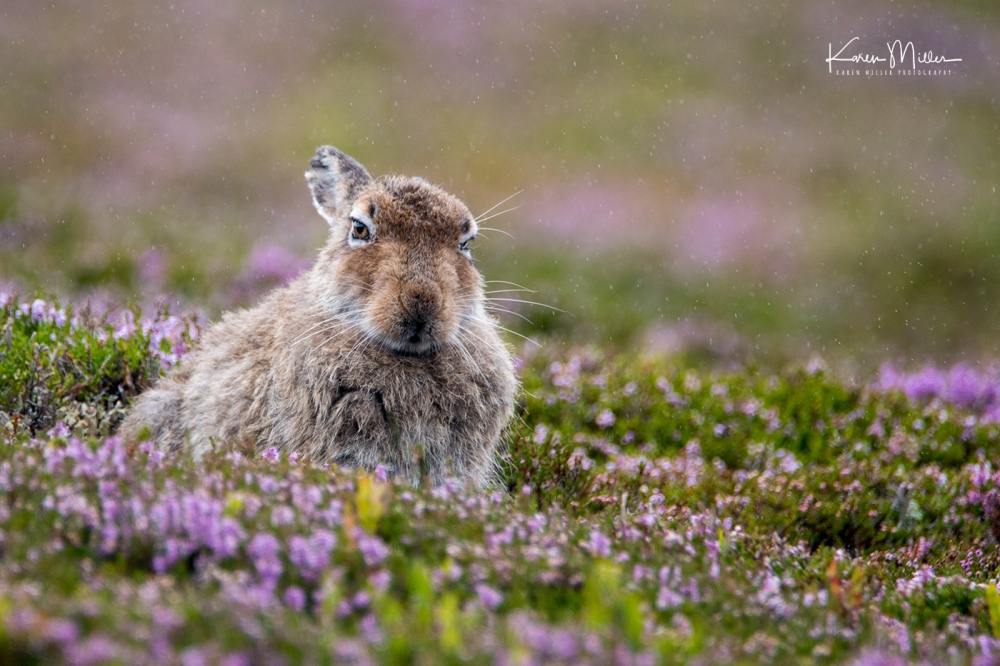 So definitely a more successful day!  [As I write this the mountain hare culling (slaughter) has begun again which is a hateful thing.  One Kind have yet another campaign under way to try to get this stopped, you can sign the letter here.]

I was heading home on the Saturday, but had my second attempt with the ospreys which proved even more frustrating than Thursday.  This time it was wet and foggy.  I was in the older hide which is side on to the new hide, and quite liked this viewpoint especially as the few birds that did try and fish often approached face on rather than in the usual spot. It was really challenging though as there was hardly any light and the birds couldn’t see the water due to the fog. Gordon struggled to spot anything as the hills disappeared.  One bird did fish though and had to make three attempts before snatching up a fish – without it this morning would have been a total disaster, as it was, it was just very disappointing.

This time I was using the Nikon D500 with my nikkor 70-200 f.2.8 VRII on beanbag.  Having the wider aperture allowed me to keep the ISO down to 1600 for these images, but, again, dfine2 has come to the rescue to remove the noise. 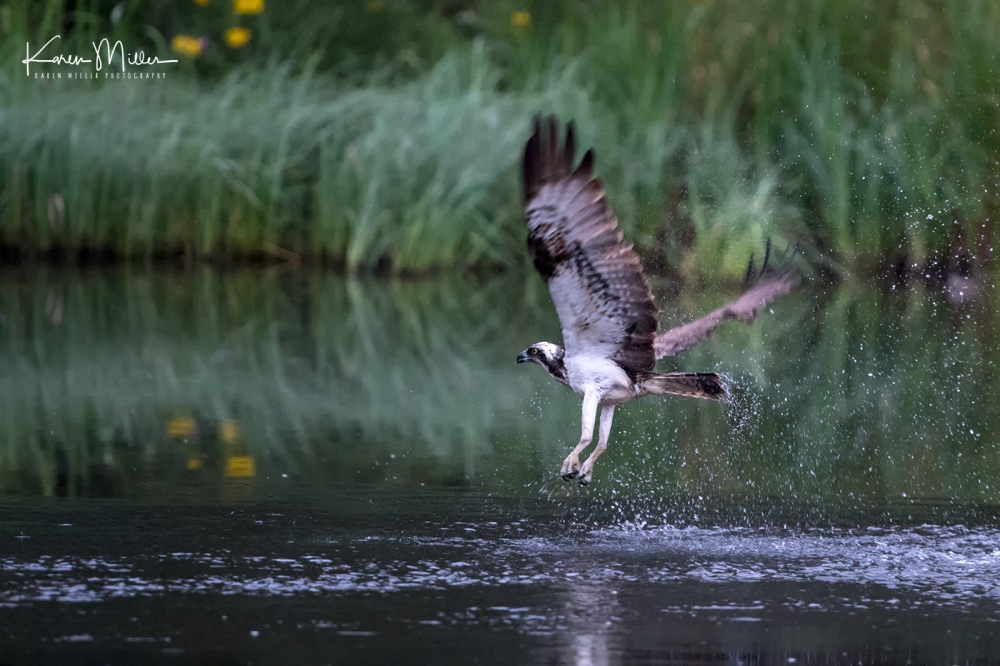 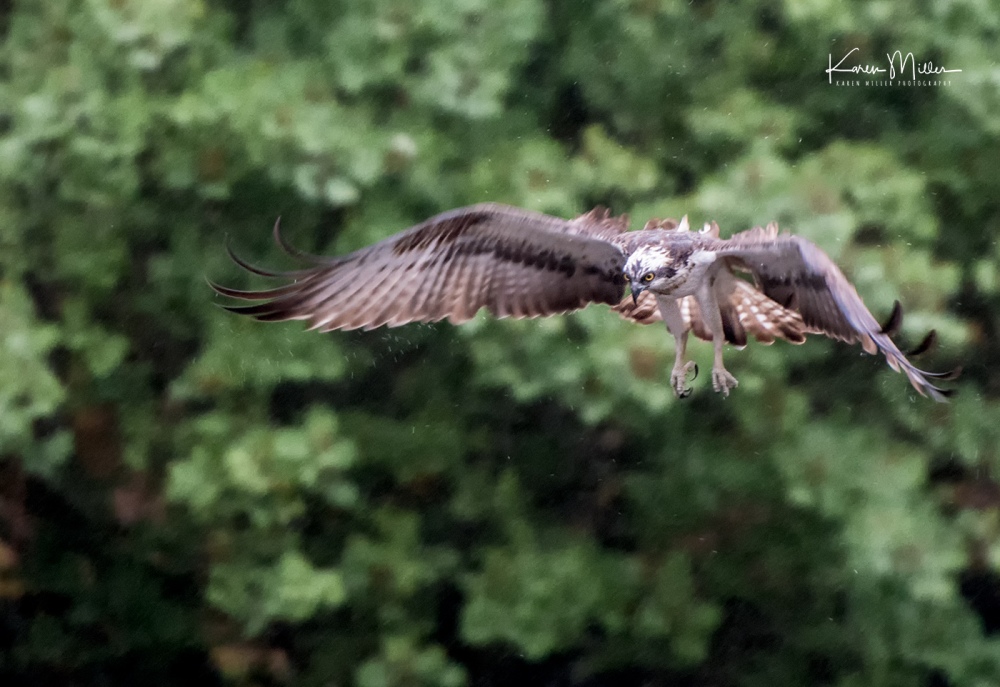 So that was it for Aviemore ospreys, an expensive disaster really. This is no fault of Gordon’s though, he has a great set-up and is brilliant at giving a running commentary of what’s happening.  Both hides are good.  Typically the following morning was perfect with lots of drops and the images taken by Gary Jones and his workshop are wonderful.  It really tested my skills as a photographer although I’m sure others could have done better.  It was also a test for the D500.  This camera continues to impress. I bought it for the ospreys last year and it performed well this year too finding and holding focus even in the low, misty light with a massive buffer.  I tend to use the group focus mode to give a little more flexibility for fast moving subjects although this only works if there’s a clean background, otherwise I’d suggest single-spot focusing (which is what I use for the hares and most other subjects).

That was pretty much it for my trip although I did spend much of the day en route down to East Lothian visiting with other ospreys. First a location near Aviemore where there were a number of them, mostly hidden behind some trees annoyingly, but sometimes flying about… 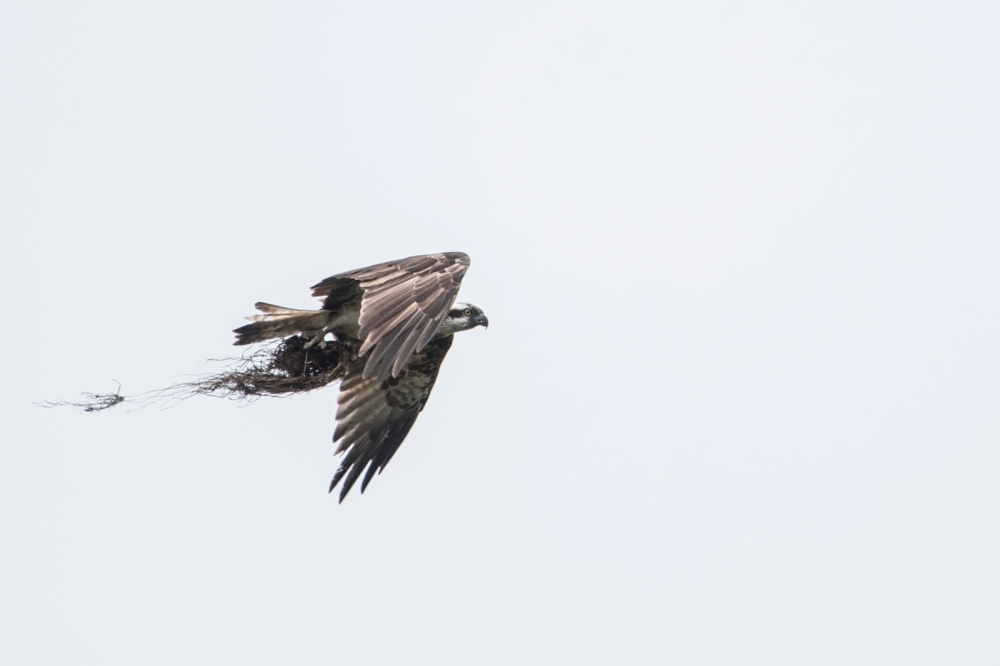 …and then I popped into Loch of the Lowes and watched the osprey family perched in the trees opposite the hide. Too far away for photographs but nice to see both chicks had fledged.

So… it was a bit of a mixed trip. July isn’t the best month for wildlife photography.  That said, I had a great time, it sure beats sitting in the office.  Highlight was obviously the trip to Lunga to see the puffins, but it is a real privilege to witness both white-tailed sea eagles and ospreys so close and any time I can spend with the hares is a real bonus!

One thought on “Aviemore: Ospreys in the Mist, Mountain Hares in the Rain”