Red squirrels are one of my favourite animals to watch and photograph. Unfortunately there are none in Glasgow though. You can find them at Aberfoyle, but the hide isn’t great for photography – I took these ones a short distance from the hide in 2016 which was a bit better but I had very limited success. 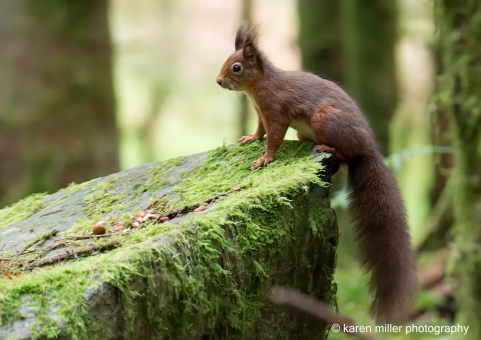 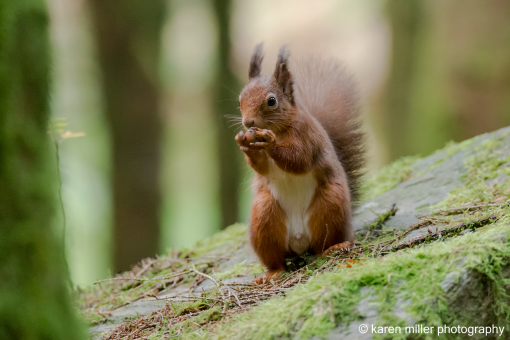 Argaty Farm, best known for its red kites has been encouraging the squirrels with some success, so that might soon be an option. Of course I love Neil McIntyre‘s Caledonian pine forest setting but it’s a fair distance away (competes with the mountain hares for my time) and is quite pricey even if it’s definitely the most photogenic location I’ve been to. However, over the Easter weekend I decided to check out Eskrigg Nature Reserve near Lockerbie. I think I had presumed it was further away than it actually is – 60 miles down the M74. Not the most exciting drive, but very straightforward except for the last bit – the reserve is not signposted until you reach the track to the carpark. Fortunately for quite possibly the first time ever, google maps got me straight there. Basically you turn off the A709 at Vallance Drive (it looks like a regular suburban street) and then take an immediate right down a track, at this point there’s a (not very clear) sign saying that this is the way to the reserve. The track isn’t surfaced, so drive carefully. 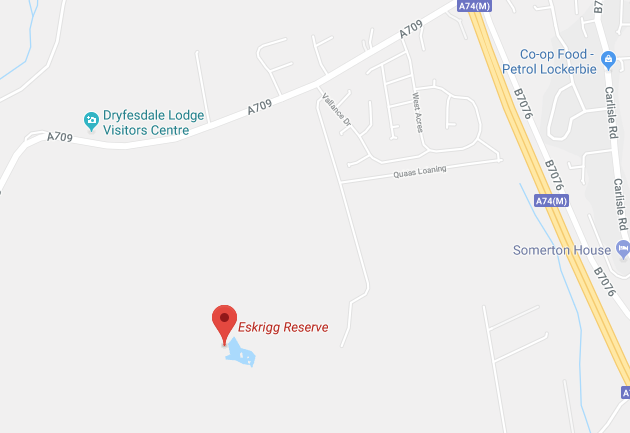 It’s a short walk into the reserve and the red squirrel hide is situated alongside a large pond filled with mallards and mute swans. The mallards were frisky – at one point I witnessed a whole group of males mounting a poor female. Light facing that way was too harsh for decent images though and to be honest my attention was on the squirrels!

The area facing the hide is fairly open although when the sun disappeared behind clouds I did have to push the ISO up and lower the shutter speed. It would definitely be best on sunny days. There are a number of trees and tree stumps. If you sit in the hide some of the more photogenic stumps are obscured by closer trees though as I discovered. 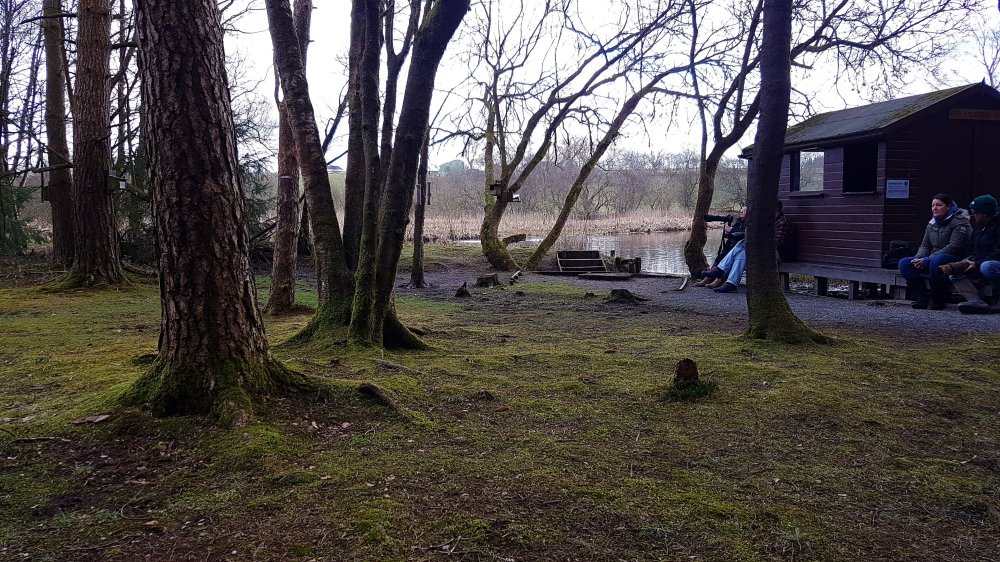 The squirrels were all quite distinctly coloured, I’m not sure exactly how many there were, four or five I think. One was light orange with a white tail, another entirely light orange, one was very dark with an almost black tail and two had some kind of issue with their noses (reported). The light orange squirrel was the most active and super-speedy. One person I spoke to said when she’d visited in the past she’d seen as many as 14 squirrels – pretty impressive!

Here’s a shaky phone video – so hard to keep up with them, but gives an idea of how fast (and close) they were! Interestingly not only were they still caching nuts, but were also unearthing previously cached ones and eating those. After a while though the squirrels all seemed to be heading to the left of the hide and I was struggling to see them, so I moved onto the wooden platform where another woman was throwing down hazelnuts.

This was better as I was lower down and the views were much improved. 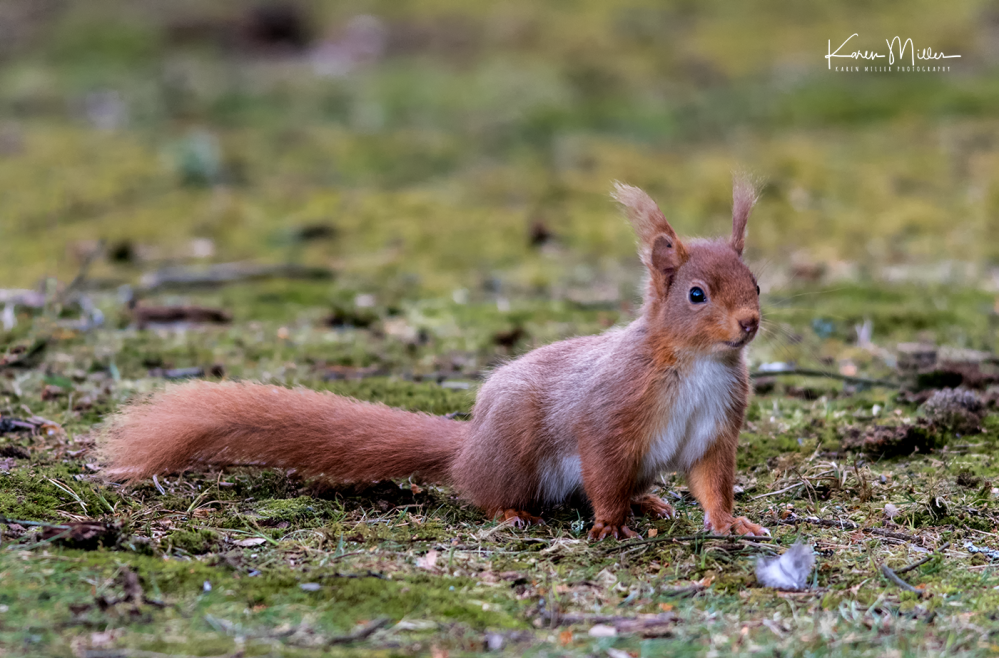 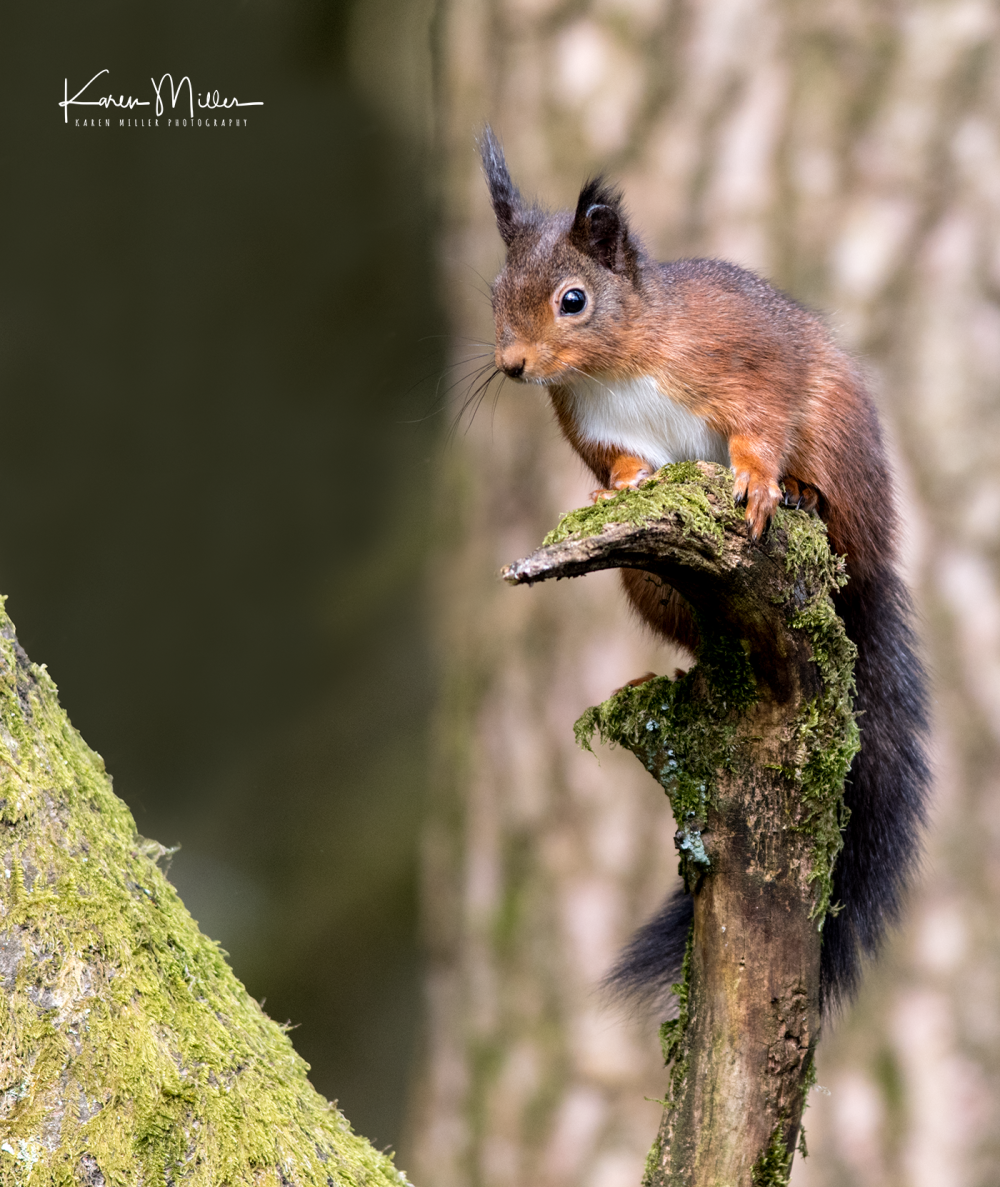 I couldn’t believe how fearless the squirrels were, I could quite honestly have reached out and touched them if I’d wanted to. They would come and sit beside me sometimes – so very sweet, but not great when you have a crop frame Nikon D500 with a 300mm F4 lens (focal distance of 450mm) – I really struggled to get the whole squirrel in the frame! I would have been more successful with my full frame Nikon D610 and either 70-200 f2.8 or 100mm macro. I’d also recommend bringing some hazelnuts (they ask that you use unshelled, so get the nutcracker out at home and pre-prepare). There were a number of well-stocked feeders at the site which attracted a large variety of birds. All the usual suspects (chaffinch, coal tit, blue tit, great tit, robins, dunnocks) and I spotted a pair of long-tailed tits once at a feeder off to the side. A great spotted woodpecker was in the woods a bit further down and came close for a minute. A treecreeper was a regular visitor As was this nuthatch, attracted by the suet/lard in the tree. Mallards and pheasants appeared below the feeders too. One thing I would mention, although I say above that a shorter lens is best for the squirrels, if you want to photograph the birds then bring a longer one too as they are a little bit further away.

So definitely the best location I’ve found that’s easily do-able from Glasgow – I didn’t even explore the rest of the reserve and I would have liked to try and photograph the mallards, but I got so engrossed in the squirrels I ran out of time! It’s also free although donations are encouraged.

This is my favourite image of the day: Check out my website for higher-res versions of some of these images.

One thought on “Eskrigg Nature Reserve”