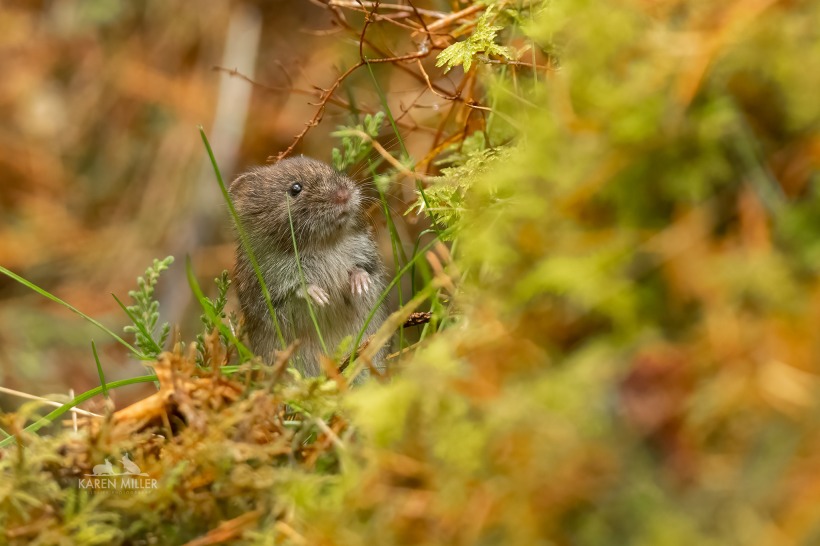 Where has the time gone? I can only apologise for my silence, I’ve been too busy taking photos, running workshops, exploring and not doing nearly enough admin! I’ve found it hard recently to spend time at my computer, preferring to be outside amongst nature. I’ve just scanned my last blog – ospreys, daytime badgers, dolphins and dragonflies… it all seems like a lifetime ago.

Truth be told it’s been a tough autumn for wildlife photography and completely different from 2021. Unlike last year, we’ve had a bumper harvest: trees and bushes are laden with berries and nuts and, after a slow start, the fungi has been prolific too. All this means that the wildlife is finding its own food. Of course, this is great, it’s how it should be. But… it’s not so great when the birds and squirrels go awol. My red squirrel family has been well down in numbers since the breeding season ended. Even now, mid-November I’m only seeing two adults and (on the trail camera mostly) one kitten. Last year they were brilliant in the autumn. I have everything crossed the others will return soon, I miss them.

That said, my red squirrel clients have all seen the squirrels and Patty especially has provided some wonderful photographic opportunities – she really is a very busy little squirrel. She comes in almost every day and has had most of the nuts I’ve been putting out to try and bring the squirrels back. She’s barely stopping to eat anything, caching them all. She cleans her paws a lot and rubs her belly on the grass a fair bit. Her tufts are growing back but at a slower rate than the boys. Here are some of the more recent images of her.

Big news where Patty is concerned is that she’s going to be on the TV! We were visited by a team from the ITV This Morning programme in October. They are doing a four-part series on rewilding featuring the show vet Dr Scott Miller (no relation!), and one of them features red squirrels. When we arrived at my squirrel site there was a cat… I’ve never had a cat there before and it wasn’t ideal. Once we’d chased it away we settled down to wait for the squirrels. Other than one brief visit from a little boy there was no sign of any squirrels and by 11 I was becoming quite anxious. Fortunately Patty eventually showed up and, although a tad disconcerted by the strange people doing unusual things, gave the team everything they wanted. I was interviewed too. Last I heard it’ll be on the show in January sometime.

‘This is the boy squirrel who is coming in now. As you can see, his tufts are looking more impressive than Patty’s. He is so very quick that photographs are few and far between.

The other positive squirrel news is that there’s a kitten! He’s not the brightest spark, but he is very sweet. We’ve only met twice as he’s quite nervous but I’ve been following him via my trail camera footage. I’ve been entertained by his complete inability to open the squirrel feeder. To be honest, he never even got as far as trying to open the lid, but spent most of his time studying it. Nor did he show any interest in the bird peanut feeder which is where most kittens go for nuts.

I’ve seen the kitten twice, so have a few photos. He’s growing up!

One of my favourite days of the year is that on which the majority of the pink-footed geese return for the winter. Large numbers roost on the Beauly Firth and spend their days in the surrounding fields. On the day of their return there are thousands in the sky and the noise is phenomenal. I love it!

In late August I was delighted to welcome the crested tits back at my pinewood site. So very unexpected. For a few weeks they were in and out regularly, but then disappeared again. The weather this November has been so mild (I still have cosmos flowering in my garden) that I’m sure they must be finding insects.

I put together this short video of all the wildlife appearing at the pinewood feeding station in September. It was lovely sitting watching it all coming and going.

Here are images of some of the birds – treecreeper, wren, coal tit, chiff chaff, juvenile robin and juvenile great spotted woodpecker plus a squirrel.

The long-tailed tits are starting to visit now too which is excellent! Pine martens and badgers are in most nights and I’ve had a buzzard on my trail camera a couple of times too.

I presume the buzzard is interested in the voles who live in the old tree stumps at my site. They are wonderful little things and I’ve been concentrating on photographing them recently. A couple of weeks ago I popped up to fill the feeder. Knowing that it would be empty I left my camera in the car. After filling the feeder I decided to sit for a few minutes and just enjoy the sights and sounds of the wood. It was a misty day which I love. Almost immediately I spotted the voles. They were scampering about the forest floor, probably hoping I’d put some nuts down for them (I hadn’t). One of them actually stopped and had a groom. I quickly came to the decision that I had to go back to the car and fetch my camera. En route back the resident stonechats appeared, perching on the bracken. The autumnal colours matched those of the chats perfectly.

Back at my feeding station I scattered some nuts for the voles and sat in my pop-up hide awaiting their return. I didn’t have to wait long. One of them appeared, standing on its back legs, sniffing the air to check the coast was clear. The light was perfect at this moment!

Later on the light wasn’t as good, but the voles were still super sweet.

Adorable! I’ve tried to photograph them since with mixed success. Last weekend I spent about 3 hours waiting for them. The beautiful light of the morning had come and gone before they appeared but it was great to see them when they did pop out their burrows. One seems to be more confident than the other. The latter often stays, partly obscured, in the entrance to the burrow for a while, plucking up the courage to venture into the open. This does allow for some sweet photos though. I had a low shutter speed by this point so I really needed a static vole, not a speedy one!

It was lovely sitting waiting for them though. There are a large number of coal tits coming in, swooping down to steal the nuts I’d put out for the voles and chasing each other away. Two robins were sizing each other up and a female great spotted woodpecker was coming down to the feeder. A squirrel appeared twice, but spotted me in the hide and ran up a tree clucking discontentedly.

As I mentioned at the beginning of this blog, we’ve had a wonderful harvest this year. And, not only that, but the colours have been stunning. Autumnal colours are my favourite colour palette. I could easily just sit admiring them for hours. It’s the only time of year I do any landscape photography, it would be foolish not too! These were taken in some of the Inverness glens and Rogie Falls.

My local area has looked pretty special too, especially on one misty afternoon.

I didn’t see (or had the wrong camera lens) much wildlife in the glens, except that is for red deer and feral goats. I only spotted the goats because I’d stopped to photograph a beautifully lit tree. I noticed their horns against the skyline. They were remarkably relaxed allowing my friend Gemma and I to photograph them.

I attempted jumping salmon a few times. There was so little water in late summer that the fish were struggling to ascend the rivers, and then we had a huge amount of rain, so, again, they’ve been stuck. This, combined with the decrease in numbers, meant jumps have been few and far between, but I managed a few at a couple of different local locations. Respect is due to these incredible fish. Watching them try and try again to overcome the torrent of water descending the falls is awe-inspiring. At times I heard a thud as they were flung against the rocks. I hope some have made it.

I’ve been up to the North East coast a few times with clients and my parents. I love this part of the Highlands, very pretty with some wonderful bird life. On one occasion when watching the common seals there were female eiders catching crabs and throwing them up in the air which was great to watch. Stonechats perched in the shrubs, a pair of dunlin snoozed on the beach, adult seals chased youngsters back into the water and the beach was strewn with mussel shells. Sadly there were a number of gannet carcasses too, birds that had succumbed to the deadly avian flu.

I also spent an enjoyable day at the beginning of November along the Moray coastline. So many birds as well as both common and grey seals. I was surprised to see a snow bunting as well as turnstone, little ringed plover, rock pipit, gannet, stonechat, redshank, curlew, oystercatchers, female long-tailed duck, eider ducks and gulls. I saw my first mink (reported). Much smaller and faster than I’d expected.

I’m sure I’ve forgotten about a whole number of things, but the last excursion I’m going to mention is a few days on Skye earlier this month with my friend Billy and friend/guide James Roddie to photograph a pair of golden eagles that James has been watching for the past decade. Due to inclement weather we only spent one day with the eagles but it was fantastic to see them. Although we didn’t have any close fly-bys, we did have numerous sightings as they glided round the cliffs and along the shoreline. Stunning scenery too.

Many of these images are available to purchase as prints via my website. You can also purchase 2023 calendars and cards via my Etsy site. I have some new card designs available now. These are some of them.

I wrote an e-book about my red squirrel family. It tells the tale of my first year watching them as I learnt about their individual personalities and discovered many things about red squirrels that I hadn’t previously known. It’s available to download for £4.

And.. finally. I still have limited availability for winter workshops including residential ones (Red Squirrel Therapy and Winter Wildlife Tour) at my rental cabin The Drey Inchberry and 1/2-3 day options such as crested tits, red squirrels, intro to wildlife photography, wildlife guiding days. Please visit my website for details.

One thought on “Autumn – Stunning Colours and Wildlife Encounters”