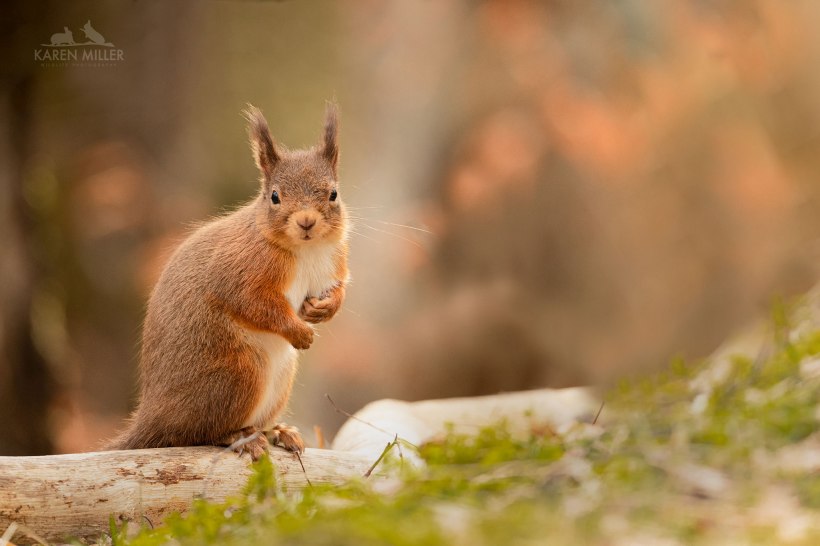 Truth be told I haven’t taken many photographs these past couple of month, I kind of lost my mojo a bit plus there’s finally been some major movement on my garden glamping cabin “The Drey” so I’ve been stuck at home in case the various trades have questions. It’s really exciting to see it progressing now after so long, it was the first project I undertook when I moved here back in October 2019 yet, for all sorts of reasons, it’s taken ages to get going! I am fairly confident now that it will be open for bookings by the summer so long as we don’t find ourselves in yet another lockdown… More on it later on in this post.

I have of course visited the red squirrels a few times. We had snow in April. More snow fell than over the whole of the winter, sadly it didn’t last long as the sun was too warm during the day but it was quite exciting to see.

I spent one morning with the squirrels before it melted.

And I photographed this male siskin in the blossom.

I popped along to Inverness and photographed the swans and a crow in the snow.

Back to the squirrels… they are starting to shed their thick winter pelages now and the ear tufts will start to disappear soon too which is a shame. They are all a bit itchy and will come to emergency stops for a quick scratch before going on their way.

The area I use to photograph the squirrels is beginning to turn green – I’ll soon be fighting an endless battle with the foliage to keep the site clear! Lovely to see the greenery now though.

I have at least two nursing females. I don’t think either of them are dominant squirrel Patty though, she’s still about but looking quite slimline. One of the two is a new squirrel as far as I can tell. She looks very young and hasn’t figured out how to use the squirrel feeder – she keeps falling off. I’ve named her Mindy. There was some interesting behaviour one morning when she was followed by a male for ages and when left alone she tended to hide in the trees..

I shared photographs of one of my favourite young squirrels in my last post, he’s still around, sitting at the feeder stuffing his face with nuts. I’ve called him Garfield.

The squirrels are wonderful at posing for the camera too

I was surprised when the local jays – often heard (horrible prehistoric shrieking) but rarely seen up close – turned up at the squirrel site. The nuts were obviously too much of a temptation!

I filmed them on my GoPro a few days earlier

The badgers have continued to entertain overnight both in the woods behind the house, and also in my garden.

The woodland ones have produced some pure gold on the trail cameras. I especially love this video of a pole dancing badger…

Last year I’m pretty sure it was mostly a pair of badgers plus their one cub who have a sett in front of my house who visited. They came by, ate some nuts I put out and went on their way with little damage to the garden. This year the woodland badgers have found the way here and are causing all kinds of havoc. Pots are regularly overturned with my beautiful tulips broken and scattered, holes are appearing and they found my sunflower bin and knocked that over two nights running – it’s been relocated! Most recently they’ve started jumping up onto my squirrel/bird photography table. The squirrels have been visiting very early in the morning, so I was leaving some nuts out for them overnight thinking they’d be safe – but no! Badgers like hazelnuts! Obviously I’ve now stopped leaving nuts here except in daylight hours! I’m currently working on a few raised beds and the priority is going to be how to stop the badgers, rabbits and squirrels munching/destroying/digging up whatever I plant.

I’ve had a few new garden visitors over the past few weeks. A pair of bullfinch have appeared regularly and a male reed bunting has been foraging under the feeders most days. I sometimes see them in the brush opposite my front garden and I’m hoping they are nesting over there. There’s also been a pied wagtail and chiffchaff. The swallows have started to appear in the fields.

I was decorating the cabin when I spotted something moving out the window – a weasel! I’ve only ever seen one once before as it ran in front of my car, so this was exciting. No camera to hand other than my phone. It was like a miniature pine marten on speed. Hopefully it will be a regular.

Most recently I filmed a tawny owl sitting on one of my feeding platforms. I’ve had footage close by in the woods, but nice to see here. I have a fair few mice that eat the food below the feeders and steal peanuts, so the owl will quite possibly have some success hunting.

No fledglings as yet, but a pair of tree sparrows have taken up residence in an old nest box opposite my kitchen window. I’ve enjoyed watching them come and go, but it’s hard trying not to disturb them as I go in and out of the house and garden – the problem with having a gravel path around the house.

Now that lockdown is easing I have finally left my little bubble and ventured further. I spent a very blowy day on the North East Coast, the wind was blowing up huge clouds of dust off the recently plowed fields and the sand on the beach was quite incredible, I could barely stand upright, but it was invigorating to be on the beach at this time.

I had a much calmer and sunnier day trip to the West Coast. I visited the most beautiful beach near Gairloch which I had to myself.

I have of course been to see the mountain hares. Only once so far due to other commitments but it was wonderful to spend time with them. Numbers are still low but I think I saw about 12. They are less relaxed in human company than before, but that wasn’t unexpected. Many won’t have set eyes on people for over a year as few folk visit in the summer months, and others may never have seen humans. They are going through “the change” right now, shedding their thick white winter pelages and turning brown. I love them at this time, they look so sweet with a patchwork of different colours.

The ospreys are back in the UK and I’ve discovered they fish quite local to me so I’ve just started to go and watch them. Most are too far for decent images, but they are beautiful birds and I love to sit and watch them, hopefully a few will come closer over the season. I sat watching a pair the other day, far too far away even to see with the naked eye, but really interesting to witness their behaviour. They sat on the shoreline for the whole time I was there, over 90 minutes, shifting positions every so often, always close to each other. There were a pair of swans close by and on occasion the ospreys would go and dive bomb them – it would have made for some great images! I’m treating the ospreys mostly as an educational experience, learning more about them, photos are a bonus.

My cabin “The Drey”! It really is progressing now. The joiners have finished, as has the plumber. There’s some electrical work to do and I have a bit more decorating to go and then it’ll just need furnished. I’m really pleased with it. It will sleep two people – either friends or a couple. I have ordered 2 european single beds (longer than UK singles) which when pushed together make a super king. There’s a small shower room, only minor issue with that is that the entrance to the shower is quite narrow (40cm) but otherwise it’s a decent size. There’s also a mini kitchen from Elfin Kitchens. It’s only a meter wide but has a combi-microwave, fridge and sink. The heaters are yet to be installed but when I had an oil radiator in there for the plasterer on very cold days it was cosy, so it should be fine for winter visitors. The floor is beautiful too and the 5 windows and double glass doors mean it’s very light with some lovely views. The hope is that it will be available to rent from July, but there are a few hurdles, outwith my control to overcome first. I will post a blog about it when it’s completed but if you would like to be kept informed then please email me – karen@karenmillerphotography.co.uk and I’ll send details when I know what’s what. I’m looking to rent it out to photographers and nature lovers and to offer workshops and guiding (not a prerequisite of booking).

Talking of workshops and guiding I am now able to offer these as covid restrictions are lessening. I’m currently a little reluctant to take clients to the mountain hares as numbers are low to avoid disappointment – they are currently shifting from winter to summer forms too which makes it quite challenging. Hopefully I’ll find some leverets soon and then I’ll be doing workshops again – do contact me if interested. Of course if you are visiting the area and do want to see them sooner than that give me a shout as I can go now but can’t guarantee close sightings.

I also offer an Introduction to Wildlife Photography workshop which takes place in my garden and surrounding area. This can be anything from one to three days and can be shaped around your particular requirements where possible. It’s targeted at beginners to photography as well as those who know their way around their camera but want to find out more about how to photograph wildlife – especially garden wildlife. This will be offered as a residential course as well with a chance to look through images in the evenings or venture out for dusk to see what is about. More information on my website.

I am only able to offer red squirrel workshops with “my” squirrels to visitors to the area and cabin guests. If you are local and would like a red squirrel workshop it’s still possible but we’ll have to book another hide – I know of some great ones so that isn’t a major problem! Please contact me for details regarding squirrels.