Little did I know when I popped down to my local Glasgow park to try out my new Tamron 150-600mm lens in late June 2016 that I’d take my most popular photograph – a rabbit with feather in its mouth!

I bought the Tamron lens (the older version without image stabilisation – Tamron SP AF150-600mm F/5-6.3 Di VC USD Lens for Nikon Camera) because I was about to attend Laurie Campbell’s photography masterclass at Aigas, and my longest lens had been a 300mm F4 prime.  However I wanted a chance to try it out beforehand.  Sometimes everything comes together by chance.  It was a rare gorgeous balmy evening in Glasgow and Murphy (the dog) wasn’t enthusiastic about walking.  I therefore left him at home and took the new lens, paired with my Nikon D610 for a walk instead!

Truth be told I had planned to photograph the grey squirrels and had taken a pocketful of nuts with me, but this proved mostly unsuccessful, partly because the pigeons would steal the nuts and secondly the squirrels kept coming too close to focus on!  The problem with such a long lens…

I found a spot in the park where there is a raised stone platform – no idea what it once was – but it meant I could take photographs at eye level without lying down (always a benefit where there are so many nosey dogs around).  I noticed movement in the bushes behind and spotted a couple of rabbits eating daisies.

They didn’t seem too fazed by my presence, probably because they could easily dive back into the bushes if spooked so I turned my attention to them.

There were a couple on the stone platform, but it wasn’t particularly photogenic, however it was a good chance to try the lens at different settings and I photographed this one grooming. 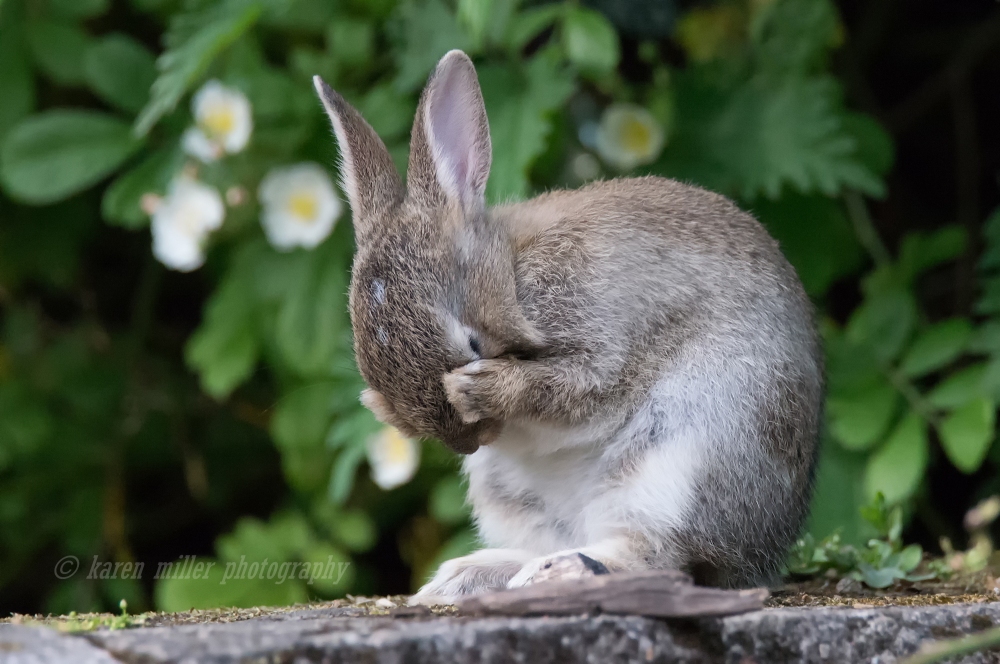 One of the rabbits, for no obvious reason, picked up a white feather.  I know a lot of photographers will put down items as possible props, but I didn’t! This feather was just lying there and piqued the rabbit’s interest.

After taking these photographs the rabbit turned to face me and I took the portrait that has proved so popular.  This is the uncropped version.

It is, without a doubt one of my favourite pictures, there’s something quite endearing about the expression.  I did however print it A3 and it was a little scary quite so large!! BBC Earth picked up on it on twitter and used it for a caption competition. A few of the responses were…

Tufty stared down the nervous Chicken gang. Eyeing possible exits from the alley he idly swung his nunchucks and spat what was left of Cogburn onto the road. “Time to dance” he said.

Honestly it’s not what you think!

‘Just trying to feather my nest!’

When does the Christmas party start ? I’m spitting feathers !!

“In my defence, that bird had it coming.”

“Well, they did say shake a tail feather!”

Oh, and I still use this Tamron lens for much of my wildlife photography – paired with the crop-frame Nikon D500 it gives me a focal distance up to 900mm.  If you’re looking for a long lens then, although the newer version, and the Sigma equivalents, have had great reviews, this is cheaper and a great option.

Prints or greeting cards available for all these images (and more!) via my website, or just email me directly.

One thought on “Rabbit with Feather – How I Got The Shot”