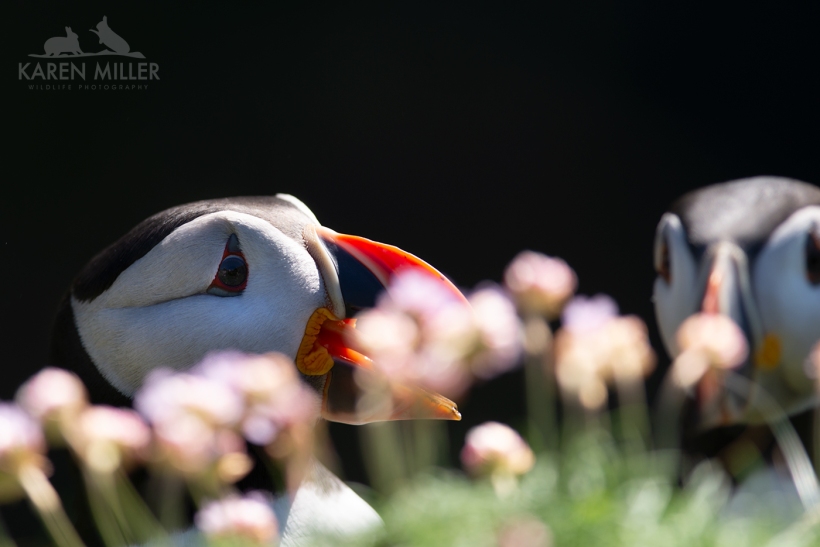 My 2018 April trip to Mull was a little disappointing – the weather was rubbish, the tide times completely wrong for otter spotting and my puffin trip was cancelled 3 times, so I was, understandably I think, a little trepidatious about the 2019 visit.  I needn’t have been, it was a great week!  Weather was mostly excellent for the time of year, tide times were good initially and the puffins were a goer!

I’ve never quite understood it, but I don’t have quite the same pull towards Mull as I have to the Scottish Highlands or Skye which seems crazy as it has so much to offer to a wildlife lover. I was trying to figure it out this time but all I can think of is that the mountains aren’t craggy enough or maybe there are just too many people. Nevertheless I do enjoy time spent there and always feel sad to leave, a week is never long enough!

Sunday morning I was up bright and very early to go otter spotting.  I didn’t have a whole lot of success.  There were a pair fishing way out in the loch but when they came in they disappeared.  However, it was lovely to watch them interacting out in the water.  I managed this photo.

Nonetheless, I love being lochside early in the day.  Other than a large number of camper vans parked up in every available space, I had the loch to myself.  The birds are especially active at that time too, and they entertained me when otters were in short supply.

Later in the day I persuaded my parents to go to Grass Point.   My mum was a little reluctant as on every previous visit she’d been greeted with miserable weather including gale force winds and couldn’t see the charm in the place.  I still fondly remembered my first visit when on an Ebirder wildlife week.  We saw stonechat and whinchat en route as well as red deer and I fell in love with the little harbour and cottage.  This time all was well.  It was a beautiful sunny day, cuckoos were calling and it all looked lovely.  I’d really like to stay in the cottage sometime, but it’s quite pricey.

I’ve always thought that there should be an otter here, and on this occasion there was! It didn’t come in shore but fished out at sea bringing up a meal with every dive. Even large fish were scoffed away from land.  Again, great to watch, but no photos.

After another early start and another distant otter. Entertaining to watch the common sandpipers chasing, flirting and fighting though. Monday was our regular trip out with Martin and Alex of Mull Charters.  I heartily recommend this if you’re on the island as it’s a fantastic way to see the magnificent white-tailed sea eagles up close and admire their awesome yellow beaks and talons as they scoop a fish out of the water.  Both pairs came down for a fish and then we were followed home by the males from both couples – one for almost half the journey, hoping for a second helping (Martin only gives each bird 1 fish so it was out of luck), it was mobbed by a gull.  Then just as it flew off the other male turned up again, also hoping for more.  This one was mobbed by a raven.  It was great to get to see the two birds for the entire return journey as they flew close above us.  The light wasn’t great but I have some images I like.

Later we drove past some woods and stopped to photograph the bluebells which looked stunning.  As we drove on I spotted some fallow deer in the wood, so we turned around hoping to photograph them in the bluebells.  They’d been spooked though but eventually reappeared.  Not quite where I’d hoped they would but I took one decent image, even if the background is a bit cluttered.

Tuesday was the only day of poorish weather and we drove along Loch na Keal and through Pennyghael searching for otters.  Unfortunately none to be seen, but a nice day nonetheless. Wednesday my parents joined the Enjoy Mull tour and I took the opportunity to spend the day otter spotting.  I started at 6 but had no success for the first few hours, then I found one in a favourite spot.  She was fishing far out (a common theme this trip) and I watched from the shore for an hour or so before she caught a huge fish and headed inland.  I anticipated where she was likely to land and hunkered down.  Unfortunately although I was in a good position, the weather was so good and there was no wind that every time I pressed the shutter of my camera, even in quiet mode, I could tell she was unsettled.  So I only took a few images.  She then disappeared into the water in the direction of the headland, so I moved on.

I stopped further round the loch and sat for a while as I knew otters had been spotted here.  Eventually I saw one, again far out, fishing.  I tracked this one as it zigzagged back and forth, always out at sea.  Finally it came in, but frustratingly just at that moment someone who lived shore-side decided to do a mass of recycling and the calm conditions meant the sound carried and spooked the otter, so it was back to tracking it again.  Next time it came ashore a car stopped with engine running, opened the window and the people started talking.  Bye bye otter…  I found it again a wee while later and this time was able to get relatively close.  But luck wasn’t with me.  It went into a dip in the rocks, rolling about in the seaweed and grooming.  All I saw was the odd paw, the tail or head every so often!  I eventually moved round, taking great care to make no noise, and caught the end of the groom, but then it moved on. Sigh…

I continued following it along the coastline grabbing a few images as it dived in the shallows until it gave me the slip.

I headed in the direction of my car and got chatting to a couple sitting lochside.  They were on the island for the day and it transpired had never seen an otter.  The otter then reappeared and I pointed it out to the couple – the woman started to cry, she was so overwhelmed by the sight. It was lovely to see the joy this brought her – that’s something I love about nature, how it can provoke such reactions.

Finally, thanks to a tip from Jacqui of Enjoy Mull I found a mum and two cubs.  These cubs must be about ready to leave home as they were pretty big.  Again the conditions and bad luck meant I didn’t have a whole lot of success.  As I arrived at their location they spotted me before I saw them and disappeared with some squeaking.  I knew where they were (due to aforementioned squeaking) but couldn’t see so I settled down to await their reappearance.  Suddenly the three of them were running towards me obviously heading inland to their holt.  I sat still taking a couple of photos, but then as they got closer they realised I was there and shot back down into the water and swam round the shore.  I felt bad that I’d spooked them, but I had no idea they’d come running at me!  Again, great to see.  So all in all it was a relatively good otter day, especially given the conditions which couldn’t really have been worse for otter photography.

In the evening we popped along to a farm where Mike of Enjoy Mull works sometimes in the hope of seeing Irish Hares. Sadly none about but a white-tail flew over and we enjoyed watching and listening to snipe drumming above us and lapwing flying around.  The young lambs were super cute too!

Thursday  was puffin day but after the failures of last April I couldn’t look forward to it.  Fortunately all was well – there were only 6 of us on the Turus Mara bird trip so I suppose it might have been cancelled due to lack of people, but it wasn’t!  It was another pleasant day with little in the way of wind.  After the Staffa visit (been there, done that, wish it wasn’t included) I had 4 hours on Lunga with the puffins.  They appeared soon after we arrived – initially there were just one or two.

But suddenly there were lots all around.  At one point they all disappeared in a millisecond.  I looked up and a white-tail was flying over!

Took a while for them to come back but they did.  It’s a busy time for the puffins as they get their nests in order…

and do a spot of grooming…

which means they are interesting to watch.  The bluebells, primroses and sea thrift all made a lovely back drop at times too.

I also found a dark backdrop which worked quite nicely.

I failed miserably at flying images as the Nikon D610 just couldn’t focus in time (missed my D500), plus the birds came in to land from below. But I have lots of those, so no big deal.   It was a thoroughly enjoyable 4 hours which went by far too fast.

Friday, my last day on Mull came about far too quickly.  The temperature had dropped dramatically and there was a bitterly cold wind, but it was sunny. My parents and I drove across the island to one of my favourite places anywhere, Fidden beach near Fionnphort. This is a stunning location especially when the tide is out – gorgeous white sand, turquoise sea and attractive rock formations.

Plenty of wildlife too.  Lapwings were up in the air defending their nests from gulls, a large group of dunlin were working their way along the shore, there were curlew and snipe as well as oystercatchers, ringed plovers and the ubiquitous greylag geese. I also saw my first golden plovers – beautiful birds, they really did look golden in the sunlight.  Sadly though they weren’t in a particularly photogenic location and I couldn’t get close as the ground was covered in pebbles and my attempt to crawl towards them ended as it was too painful!  There’s a campsite at Fidden and I’d love to stay there when I finally get myself a wee camper van.

It was a great week, Mull really did us proud. There are many places, especially on the West Coast / Western Isles that I’d love to visit and I know have just as good, if not better, wildlife and far fewer people (which would be a definite bonus), but the thing about Mull is I know where to go for wildlife spotting which makes it an easy option, and of course, it has access to puffins! One of these days, hopefully in the not too distant future, I’ll get to explore some of these other locations, but for now, I thoroughly enjoy my spring trips.